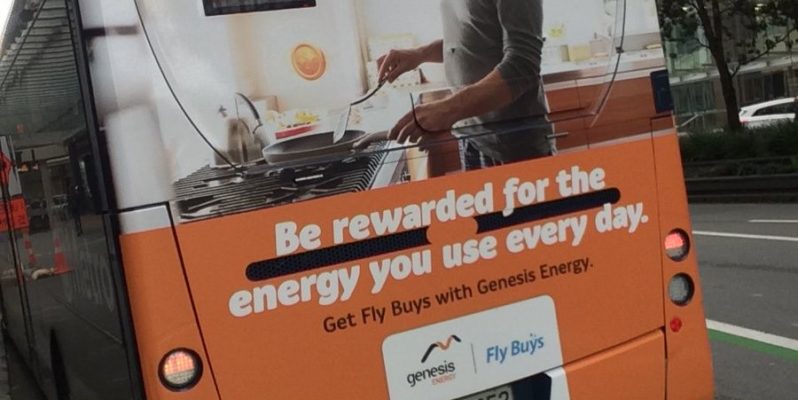 With over half their power generated from burning coal and gas, Genesis Energy’s new Fly Buys promotion is literally rewarding customers to accelerate climate change.  The more power Genesis customers use, the more Fly Buys points they earn. The redemption rate is quite low, at 1 point for each $50 spent on power, but it’s the overall message that ‘more use is good’ that is the real problem. To address climate change we need to consume less overall, but especially dirty energy. As New Zealand’s largest residential electricity and gas supplier, this could have a significant impact on emissions from the sector over time.

The message is the opposite to that of EECA, the government’s energy efficiency agency, and runs contrary to our obligations under the Paris Climate Agreement, to which New Zealand is a signatory. Genesis is 51% owned by the NZ Government and is publicly listed on the New Zealand stock exchange and the Australian stock exchange.

The sales promotion launches at a time when the NZ Super Fund and the Australian Stock Exchange have announced they will require carbon reporting and in the wake of the New Zealand Stock Exchange’s first request for environmental reporting.

It also runs contrary to public opinion with 64% of New Zealanders seeing climate action as ‘very important’, according to the Colmar Brunton Better Futures Report 2016.

At a time when NZ’s energy demand means our power companies can’t wean themselves off burning coal at Huntly, encouraging increased home energy use makes no sense. It’s either cynical, irresponsible and unethical – or at the very best inept.

The promotion is doubly damnable given Genesis’ sponsorship of DOC efforts to protect the whio from extinction, with climate disruption identified by Forest & Bird, among others, as a significant threat to native species’ survival.

With climate change driving wilder weather and rising seas that are already threatening lives, including in the Pacific, the promotion is unethical and arguably immoral. They could be incentivising savings instead.

I’d encourage anyone under 50 and anyone with relatives in the most vulnerable Pacific islands, those who will be most affected by climate change, to tell Genesis what they think by switching to a more responsible power company.

An independent comparison of NZ electricity retailers, including ratings on environmental sustainability, is provided here by research company Canstar Blue.

Disclaimer: GoodSense does not currently work for any electricity retail clients but does deliver marketing services to Enviro-Mark Solutions, who deliver carbon certification programmes, and for a number of clients in the renewable and energy efficiency sectors. We are signatories to the open letter to the NZ Government on climate change.

Read more about our work with GoodSense here

Find out more about working with Kath Dewar GoodSense here

Email us your questions or chat live with us now.