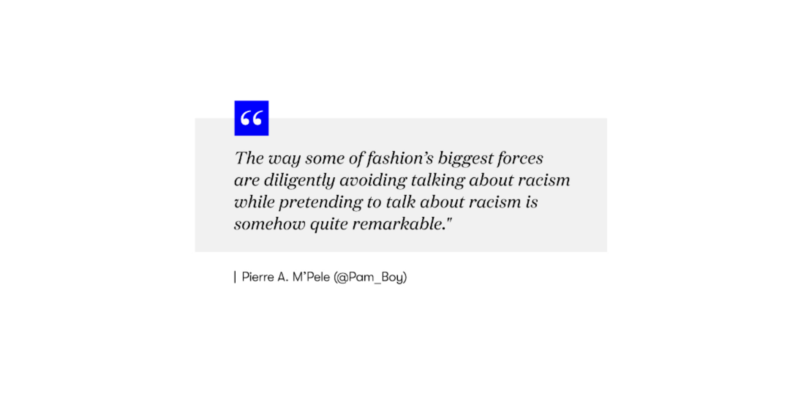 There’s nothing new about police violence toward black Americans.  Here in Aotearoa, the level of extra attention of all kinds police pay towards our Pasifica, Māori and migrant communities is well documented.   As  Associate Professor of Law Khylee Quince says, in this piece by Meriana Johnsen “Data shows that Māori are far more likely – almost nine times more likely – to have a dog set upon them, or to have an armed response in relation to policing.”

Here and elsewhere, there has been a new surge of online and street protest against racism, and particularly state violence, following the murder of George Floyd.

Some of the online protest has been from major brands, keen to be allies in the struggle for fair treatment. 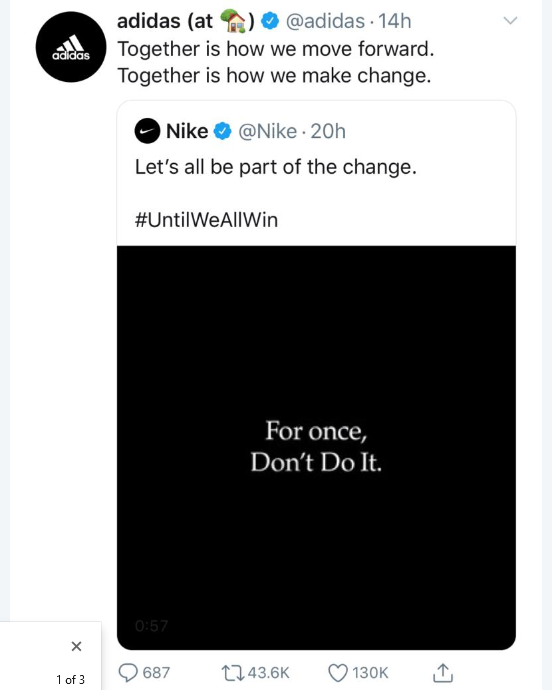 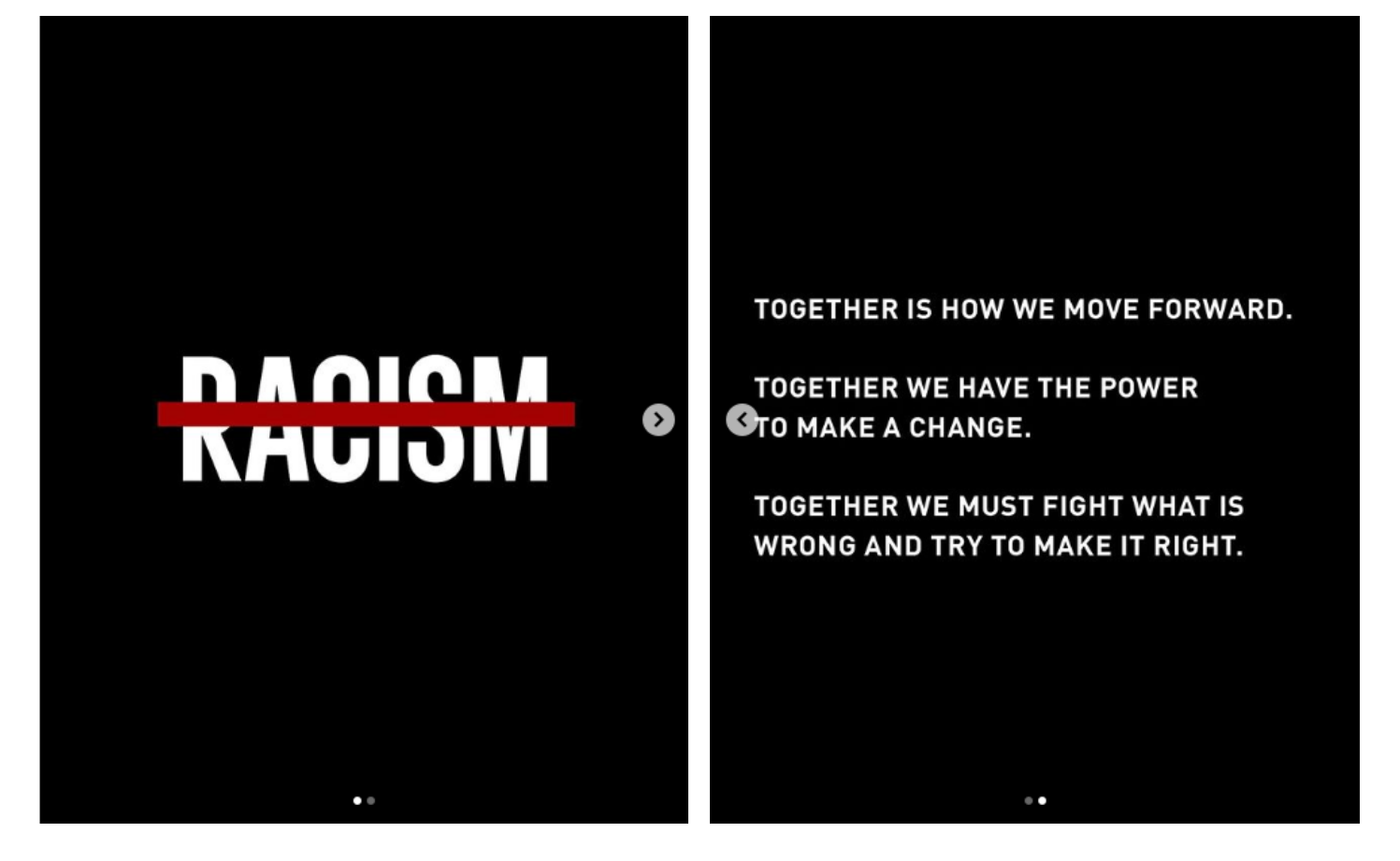 Competitors Nike and Adidas even entered a social media truce over it, with Adidas retweeting Nike’s statement, as Cassie Roma describes here.

However, actions speak louder than words.

Both Nike and Adidas make the shoes they sell in America overseas. Unlike some sneaker and shoe manufacturers, which make in the USA, they choose to follow cheaper wages and non-unionised labour to keep their costs lower, exploiting people of colour in other countries.

On 3rd June 2020, Julia Bond, an Adidas designer based in the US, spoke out about the unaddressed racism she experiences at work and asked Adidas to apologise.  The letter she sent Adidas management opens by quoting Rachel Cargle: “I don’t want your love and light if it doesn’t come with solidarity and action. I have no interest in passive empathy.”

As this article, also by Marc Bain, explains corporate racism is more subtle than police brutality but blights millions of lives.

As marketers, if we want to present our brands as allies to black Americans or other people of colour, we need to lead our companies to address racism in our own procurement and HR practices, in how and where we make what we sell, in how wages and prices are managed, in what our sponsorship dollars support.

If we care about equality, we need to lead in slowing the climate crisis, because it is already affecting the most vulnerable people here and elsewhere in the world the most.

Rather than sharing platitudes, we might also address the unconscious bias in our advertising and communications.

I watched a NZ Government agency webinar this week.  It featured dozens of draft concepts for adverts, all of them featuring groups of people who live here in Aotearoa.  The goal of the ads is to create a widespread behaviour change.

Every face in the draft ads looked pākeha – except for the one gentleman sharing a hongi with a visitor to a Marae – and while many people who whakapapa Māori are very fair, the overwhelming impression I got was the ads were for white people like me.

I have never experienced racism.  Even as a migrant of 23 years, from the countries that colonised Aotearoa, I can count the anti-immigrant comments I’ve received on the fingers of one hand, a kindness for which I am grateful beyond words.

The closest I can come to how it might feel to see ad after ad scroll by, with not one face the same colour of mine amongst them, is looking at an all-male conference speaker line up or photo of a boardroom.  Thankfully here, that experience of exclusion is slowly becoming less common, in no small part to actions like those by this scientist and this politician, taking active steps to overcome systemic barriers and the unconscious bias we all have to people ‘like us’, to build equality.

So I asked the Government agency manager, in the webinar chat, if the ‘only pākeha’ approach would change in the final ads, or if it reflected demographic targeting?  They said I made a good point and began to answer that the ads would reflect ‘consumer sentiment’ found through research, before saying ‘of course the ads would reflect the breadth of New Zealanders’.  I wasn’t sure exactly what this meant – or what the outcome would be.  It was a small thing.  I guess time will tell if it makes a difference.  It was, however, a thing I could DO and if it doesn’t change anything for this coming campaign maybe in future it will.

We all have work to do to.  I am extremely aware of how little diversity we have in our own team at GoodSense.  I can blame a predominantly pākeha industry and do nothing.  Or I can continue to seek out new, talented team members who whakapapa Māori and to different places on the planet.  Not just because it’s right, but because we will, together, only be more powerful for the knowledge, connections, perspectives and experience they bring.

Here are those links to Marc Bain’s articles again >

Can Nike and Adidas turn support for protestors into action

Thanks to the wisdom and work of Khylee Quince, Meriana Johnsen, Rachel Cargle, Julia Bond, PIERRE A. M’PELÉ and Marc Bain that let me put this together. Please follow them.

3 Responses to " Beyond platitudes  #BlackLivesMatter "