Dole – too little too late? 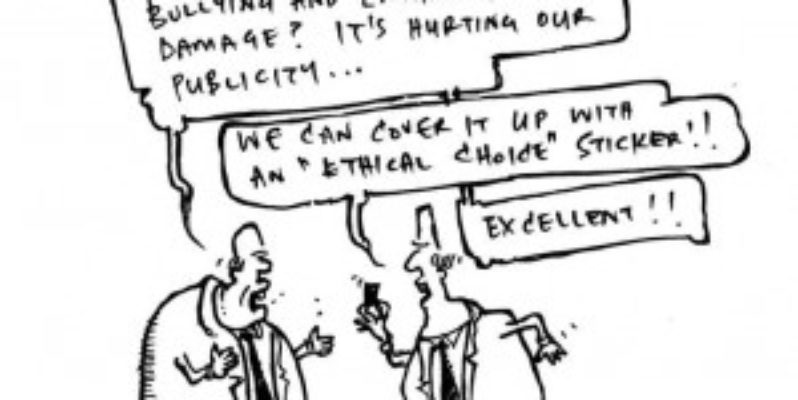 GREENWASH, SOCIAL AND ENVIRONMENTAL ETHICS Dole – too little too late?

This morning, on TV1s Breakfast, I was asked what advice I’d give Dole if they

called GoodSense for marketing help. I thought the answer demanded a little more space than live television permits so will attempt to do more justice to it here.

First, I would tell Dole that I believe their ‘Ethical Choice’ greenwash has damaged not only their banana brand in New Zealand but also the wider Dole reputation. Since Dole announced they were ditching ‘Ethical Choice’ yesterday, friends, with neither marketing nor employment rights backgrounds, have been joining the dots between Dole bananas, Dole pineapples and other Dole products and between treatment of Dole growers and the employment conditions of Bangladeshi garment workers. This places Dole at the heart of a story of increasing concern to New Zealanders – what practices their consumer expenditure supporting.  And this is a story turbo-charged by consumers’ unprecedented power to publish their hopes and concerns to thousands, in seconds for free, online.

Given a lack of evidence, a paucity of time, most consumers will give major brands the benefit of the doubt. But they aren’t stupid. And they aren’t particularly forgiving. Colmar Brunton’s ‘Better Business Better World’ research in 2012 showed 94% of New Zealanders ‘get annoyed when products pass themselves off as greener than they are’. So I would advice Dole that, like Cadbury following the palm oil fiasco, they can expect a long term decline in brand trust and consumer support as a result. Ditching ‘Ethical Choice’ at this point, following the Oxfam research, is too little, too late.

Secondly, I’d advice them that the trend away from public acceptance of corporate profit based on harmful exploitation, be it of people or the environment, is bigger than they can buck, even given their status as one of the largest food companies in the world. In fact, as such a major household brand, and one with now a grubby reputation, they are likely to find themselves an easy target for consumers choosing to vote for ethics and environmental responsibilities with their wallets.

Thirdly, I would recommend that they seize the opportunity this trend presents to reinvent their business and prepare to thrive in the 21st Century. This would rely on an end-to-end overhaul of their entire product supply and distribution chain. The goal would be to create a step-change improvement human and environmental wellbeing. This does not mean tokenist provision of selected ‘green’ or ‘ethical’ lines. Success would require a wholesale commitment to supporting and stimulating independently certified grower co-operatives using organic production techniques across their entire product range, with transparently promoted deadlines for achievement. Inside 5-10 years Dole could single-handedly improve the wellbeing of thousands of people and millions of hectares of land. Now that would make them an ‘Ethical Choice’, worldwide.

Global brands like Puma and Unilever are already on comparable trajectories to future-proof their businesses. They are finding the programmes are stimulating innovation and efficiency, building towards profit from savings and improved brand perception, rather than heedless exploitation. And they are committed to credible marketing communications about their progress on that journey. I’m not expecting Dole to call, but the GoodSense advice if they did would be the same as we give New Zealand brands about their marketing every week – be authentic, be transparent and respect your customers.

Update 3rd June 2013: Subsequent to this article, Dole NZ are engaging – both with Oxfam NZ and, to my surprise, they also DID ring GoodSense. In conversation I was able to expand on points above and feel somewhat heard. Dialogue is always good. Will be interesting to see where they go next…